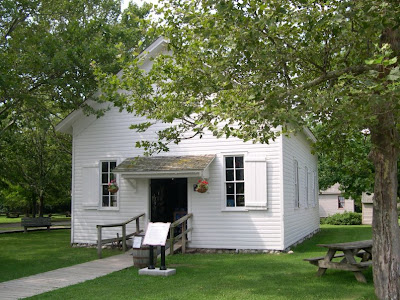 Originally built in 1878 in Clayton Township on Corunna Road, the Township Hall was a gift from the people of Clayton Township and was moved to Crossroads Village in 1976.
Clayton Township was originally called Miller's Settlement, after the first settler, Adam Miller, who arrived from New York.
When Michigan was forming towns and townships, local residents submitted possible names. Since no name was sent in for this area, someone in the state post office chose the name Clayton, and it stuck. 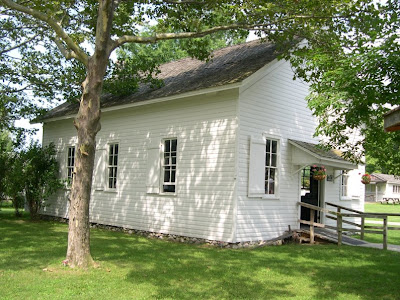 Township halls, such as this one, were used for elections, dances, and for meetings of government and social groups.
Here in Crossroads Village it is used as a children's wooden toy store. 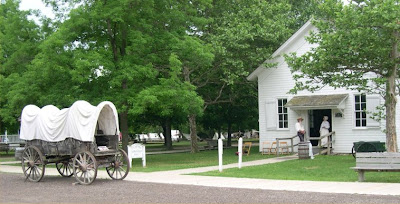 Historical Ken
My wife and I and members of our family practice living history and portray citizens during the era of the American Revolution (1770s) and Civil War (1860s). You'll find us very often at mid-18th or 19th century reenactments doing our best to replicate the eras as accurately as we can in clothing, manners, speech, and other ways in order to bring the past to life. I believe knowledge has to be the top priority in living history; knowing about the time period you are presenting - absolutely knowing - can make all the difference in how serious you are being taken. Too many focus solely on clothing...but what I am attempting in this Passion for the Past blog is to help living historians and general history fans to look beyond the obvious - to study life as once lived. Yes, clothing is important, but it only tells a small part of the story. To give a more complete picture one needs to look at the 18th or 19th century world around them - to put themselves in that world - and then they will be able to develop more fully a presentation of greater interest for not only the general public, but for themselves as well. I hope you like it.